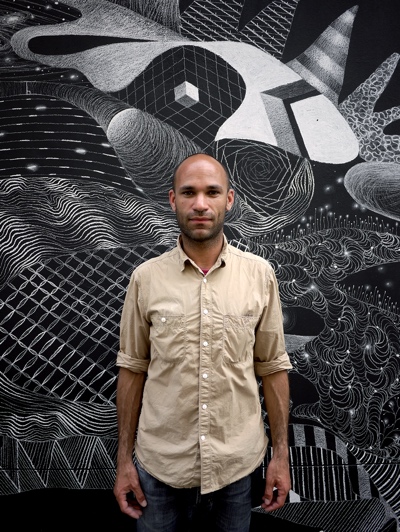 Within the framework of the artistic program, woven by COAL, at the Maillon – theater of Strasbourg on the occasion of the European forum “Where to land, embedding european performing arts in the new climate regime”, on October 5th and 6th 2022.

A graduate of the École nationale supérieure des Arts Décoratifs de Paris in 2002, Philippe Baudelocque has integrated the collections of the Museum of Natural History of Orleans and the Centre Pompidou. His work is irrigated by major sources of inspiration for him: the place of humans on Earth and in the Universe, extraterrestrial life, the interaction between the different kingdoms, and knowledge. He thus develops a posture of laboratory around graphic and symbolic forms. In 2016, he was invited by the Palais de Tokyo to clear a monumental staircase. In 2018, the RATP entrusts him with the realization of permanent wall drawings in the station Châtelet – Les Halles. He multiplies XXL murals, from Paris to Hong Kong via Canada. He is supported by the gallery of the day Agnès b. (Paris). He also collaborates with the brands Hermès, Diptyque and Pierre Hermé for limited series.

On October 5th and 6th, COAL weaves an artistic program at the Maillon – theater of Strasbourg on the occasion of the European forum “Where to land, embedding european performing arts in the new climate regime” which gathers professionals of the culture in order to build a reference frame of actions for an ecological redesign of the performing arts in Europe. Within the framework of this event, the artist Philippe Baudelocque proposes an ephemeral fresco of the curlew.

It is estimated that one third of the birds have disappeared in France over the last twenty years. To reflect the symbolic and real impact of this disappearance, through art and shared creation, a vast program of murals representing birds threatened by climate change has been launched. With this project, COAL and the Ligue pour la Protection des Oiseaux (French League for the Protection of Birds) continue a project born in the United States, the Audubon mural project, carried by the National Audubon Society and the Gitler gallery.

In the line of his “cosmic animals” representing the fauna, Philippe Baudelocque creates a new fresco for the Murs d’Audubon at Le Maillon. Made with Posca on the windows of the theater, this one will fade and erase with time, as if to materialize the disappearance of the bird it represents: the curlew.

The latter is very strongly threatened locally in Alsace. There were 200 to 250 pairs in the 1970s, there are only 6 to 7 pairs left today. This decrease is caused by the rarefaction of its habitat, the species needing a large surface of natural wet meadow. But these are treated with fertilizer to make hay, fragmented, dried to be transformed into crops, often corn, and are over-frequented. Recognizable with its long downward curved bill, the curlew has entered in a few years the category of vulnerable species.

Where to Land – Artistic program at Maillon – Théâtre de Strasbourg

On October 5th and 6th, COAL will be presenting an artistic program at the Maillon – theater in Strasbourg on the occasion of the European forum “Where to land, embedding european performing arts in the new climate regime” which will bring together cultural professionals in order to build a reference framework of actions for an ecological redesign of the performing arts in Europe.

The four invited artists, three of whom have been awarded the COAL Art and Environment Prize, represent this new artistic scene of ecology that COAL has been helping to bring to light since 2008.

– The film Birds of America by Jacques Loeuille, public screening on October 6 at 8:30 pm

– The installations La Relève and Lame de Fond by Capucine Vever, presented from October 5 to 24

– A fresco performance by Philippe Baudelocque for the Murs d’Audubon, which will remain visible in the Maillon until it is altered

From engraving to film, drawing and performance, this selection offers a rich panorama of the practices used but also of the issues addressed. It is a question of the future of the oceans in the face of the intensification of maritime traffic and its pollution; of the diversity of birds, less and less numerous to sing the spring; and of the valorization of the living in all its forms in the face of the Sixth Mass Extinction. So many subjects that echo the actions of COAL.