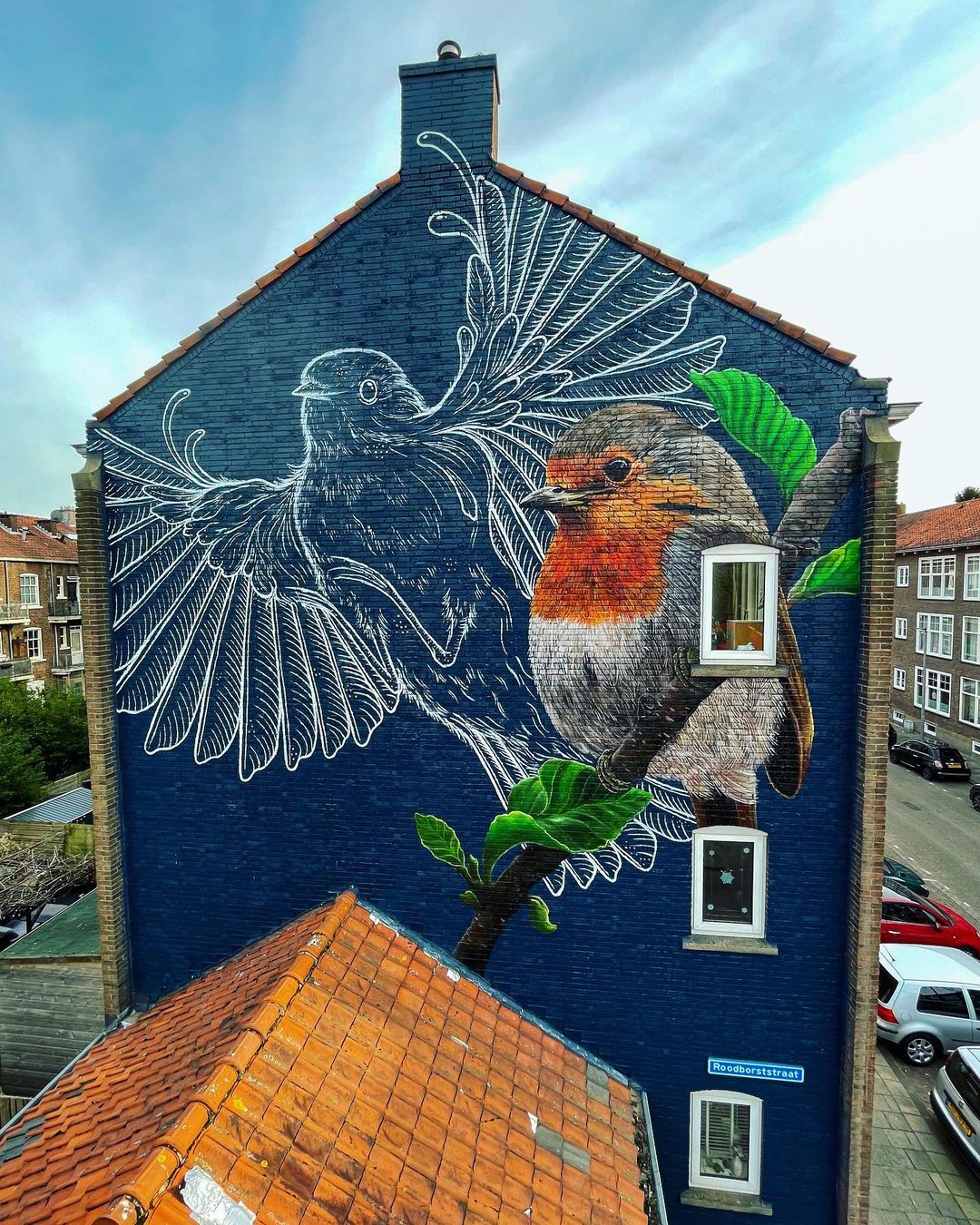 As part of the campaign “Your Birds, Our Birds” carried by the European cooperation network ACT, Theater Rotterdam, produces a mural of a familiar robin in Rotterdam, the Netherlands.

Painter and illustrator based in Rotterdam, the Netherlands. Her main focus is on murals, window art and (digital) illustrations. Her strength lies in her work of lines and highlights where she focuses on femininity, elements of nature and movement. Today, she explores colors, new materials and new techniques. Anything that can bring that sparkling feeling and develop as an independent artist.

Created by Dutch artist Marloes de Kiewit, the mural was developed in collaboration with Theater Rotterdam, as part of the Your Birds, Our Birds campaign, and the ALL CAPS – capital art and Hip Hop festival, in the “Je Smoel” neighborhood of Rotterdam (Netherlands).

The project took place in the Roodboorststraat area of Rotterdam, which in Dutch means robin (Roodborst). The robin is a protected bird in the Netherlands. The inhabitants of the Roodboorststraat are at the initiative of this project. Indeed, by asking the municipality to decorate their walls with murals, the citizens expressed their wish for more art in the public space. The ALL CAPS festival and the HIJS association were given the mission to implement this project.

The latter then contacted Theater Rotterdam, which participates in the Your Birds, Our Birds campaign of the European cooperation network ACT. After several consultations, the three parties made a call for projects for street artists who were then selected by a jury composed of local residents. They selected a proposal by Marloes de Kiewit, a young mural artist based in Rotterdam. This mural was also her first large-scale mural.

“Your Birds, Our Birds” Campaign

The “Your Birds, Our Birds” campaign was launched at the IUCN World Conservation Congress in Marseille in September 2021. To spread the impact of this initiative across Europe, ACT kicked off the campaign launch by inviting all network partners to engage their local communities of artists, scientists and civic organizations to submit murals of threatened birds. Inspired by the mural by artist Fikos in Marseille, which was created by ACT partner COAL for the IUCN World Conservation Congress, network partners are now busy proposing their mural projects.