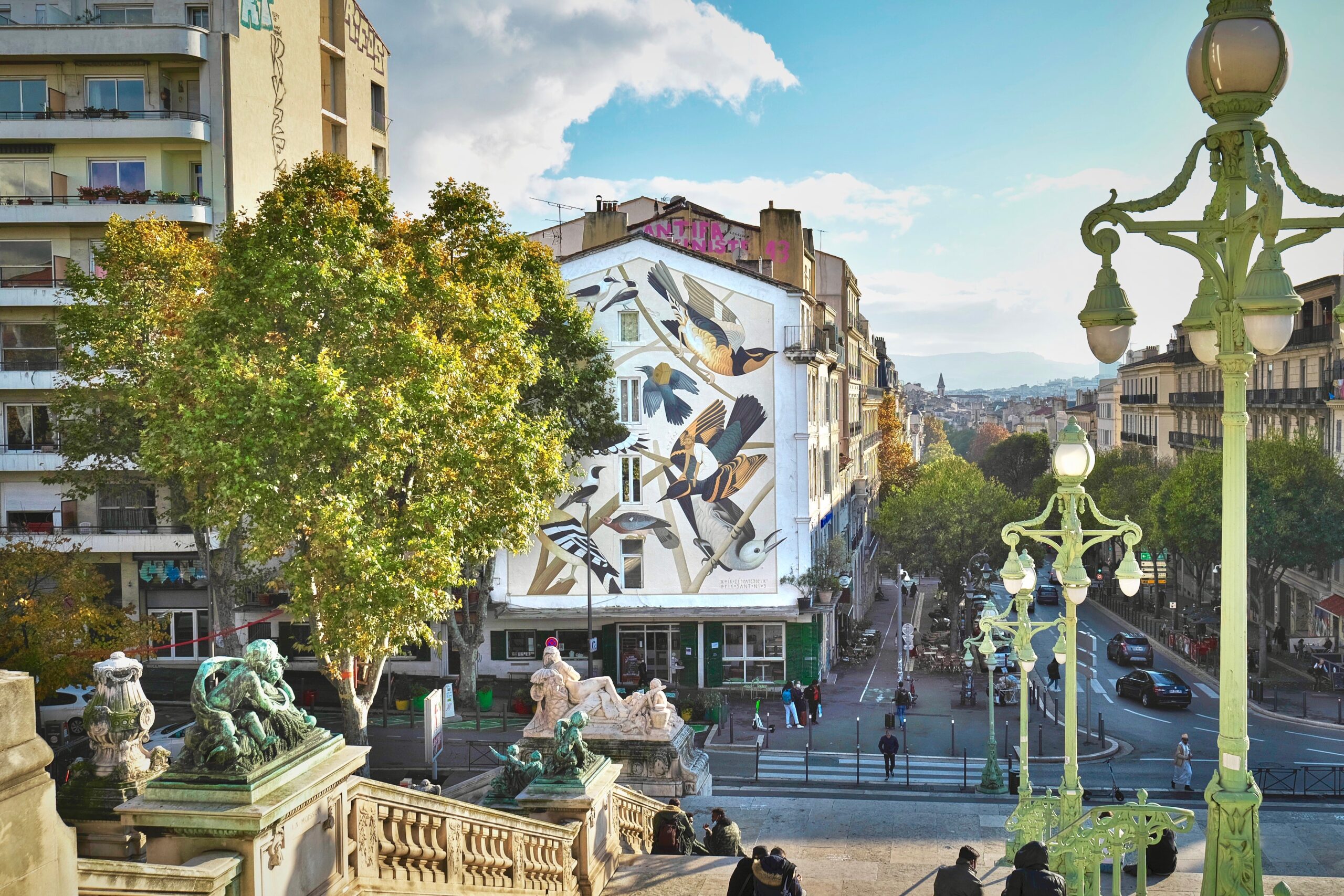 ON THE OCCASION OF THE IUCN WORLD NATURE CONGRESS 2020-2021 AND AS PART OF VIVANT, A CULTURAL SEASON FOR BIODIVERSITY.

Originally from Greece, born in Athens where he still lives, Fikos is an artist who works mainly in iconography and murals. After doing graffiti and iconography in Orthodox Christian churches, Fikos developed murals in public spaces, creating an unprecedented encounter between monumental Byzantine techniques and street art.

Inspired by the Orthodox Christian tradition and ancient Greek mythology while being directly related to the places in which they are presented, Fikos’ paintings are not only the simple expression of an artist but also embody a social event, a true “creation” (“demiurgia” = demos “citizens” + ergon “work”) a work for a society of citizens.

In September 2021, Art Climate Transition, COAL and Planète Emergences presented a monumental fresco by the artist Fikos in Marseille, to accompany a creative and committed citizen mobilization against the erosion of biodiversity and the mass extinction of birds. This fresco was created on the occasion of VIVANT, a cultural Season for Biodiversity and symbolizes the launch of the Murs d’Audubon. It was inaugurated during a day of meetings, on September 5, 2021, organized in partnership with the OFB, the LPO and the magazine Billebaude.

The work reveals some Mediterranean and migratory bird species, some of which are taken from the drawings of Jean-Jacques Audubon. Inspired by this great ornithologist and illustrator, Fikos brings his personal touch with his style and his colorful paintings. Some details, such as the Greek explorer Pytheas of Marseilles, add to the work a historical and humorous side.

Among the birds represented, American birds such as the “mountain mockingbird” and the “American nutcracker”, both on the right of the fresco, and Mediterranean birds: the “eared traquet”, a black and white passerine that lives in the rocky hills, the “wattled hoopoe” (recognizable by its tassel and its long and curved beak) or the “blue monticole”, which climbs quite high in the mountains, but can also be seen in Corsica at the seaside.

AN XXL MURAL AT THE SAINT-CHARLES STATION

The work of the artist Fikos, due to its high visibility from the Saint-Charles train station, on the facade of “L’Écomotive Café”, at the corner of Place des Marseillaises and Boulevard d’Athènes, will thus reach a wide audience on the issues of biodiversity.

Having been a graffiti artist and iconographer in Orthodox Christian churches, Fikos continues his development by painting murals in public places. The value of his works is exceptional, as it is the first time that the monumental Byzantine technique meets a contemporary movement like street art. A mixture of cultures, pigments and species that weave links between the open sea and the coasts, between humans and birds, between the past and the present of the Mediterranean, making the walls of the Phocaean city vibrate since its Greek origins.

The realization of this fresco is financed by the ACT network – Art Climate Transition, a European cooperation program initiated by ten European cultural actors from 10 European countries working in the field of performing and visual arts. Its objective is to raise awareness of the climate crisis and to imagine other possible futures through the arts.

The association COAL, member of the ACT network, is the first French cultural actor working in favor of a culture of ecology. COAL is at the origin of the deployment of the Murs d’Audubon in France. COAL and Planète Émergences have joined forces to create the work of Fikos in Marseille.

Created in 2000, Planète Émergences develops projects that combine artistic creation, social cohesion and societal issues. The human question is at the heart of the actions carried out by the association which participate in a new look at a world in deep mutation. The association participates in creating links and enhancing the value of heritage. It carries out long-term projects with a strong territorial dynamic and partnership logic.